I think that is a good idea. I have plenty of parts on the shelf that hasn’t been used in some time. This could help surplus old parts to reduce inventory.

I used the Low Use Parts Report (RPL) for desired number of periods, exported to a spreadsheet and converted to a table. In conjunction with the RPL, I use the Parts Listing (MPLL) , also in a spreadsheet table. It was enlightening to see that I had three of something that was last purchased two years ago with no recent sales history. Hmmm, what does this fit? Do we even have those vehicles anymore? Maybe there are related parts that also need to be obsoleted and returned to vendor if possible. (This is where using fit codes helps.) Granted, this is a bit involved as opposed to being able to click one button and get the info you need, but it worked pretty well.

This report would be very handy - have used it in other Parts Inventory Systems. Especially nice to be able to run report choosing months. IE; 60 months and older
48 - 60 months, etc. Instantly tells you “What’s Old”.

So I guess a couple things with this:

With FIFO this is really easy to grab. But if you aren’t using FIFO it’s a little less easy. Though I think I just got an idea writing that sentence down.

So assuming we go with the data we have today: If you are running EOP, I can get parts with no usage in over 12 months pretty easily, along with last purchase date. But would last usage date be helpful?

How about the scenario where I bought three parts on 1/1/17, used 1 of them on 3/1/17, then bought one more on 4/1/17. The last purchase date wouldn’t really reflect the age of the original 2 parts still in inventory (which is where FIFO comes in).

My idea is that we could turn on the FIFO stack, but still use the average price in a hybrid model… I’ll have to run it through some circles here and see, but that could work in theory, and give you very detailed reports to the level that you have 10 starters, 4 of them are 10 months old, 3 of them are 6 months old, and the other 4 are 24 months old.

I would be more interested in a generic “No Movement” report. FIFO, last purchase date really do not matter in this instance. Zero (0) movement in (x) months is what is awesome.
Example: 1515 Filter on shelf for 25 months. Ability to create report showing zero (0) movement 24 months and older would trigger the 1515 filter to show. then it could be returned, discarded, etc. If it had been purchased 2 months prior really isn’t the age factor. I would question why it was purchased and not used or returned at that point. Ok, I rambled. The real tool would be Zero (0) movement in (X) amount of months.

OK. Well, we can get you the last 13 months as long as you are doing EOP. You could either use the low use parts report, or the new lookups. Just add the Avg Usage / Yr column then filter on that. That field is a sum of the previous 12 months of usage, so just use the numeric filter, set it equal to 0. Then to just show parts with on hand quantities, filter on that column to show any parts with qty greater than 0. Save that as a preset, maybe named Low Use Parts (12 months) or something. 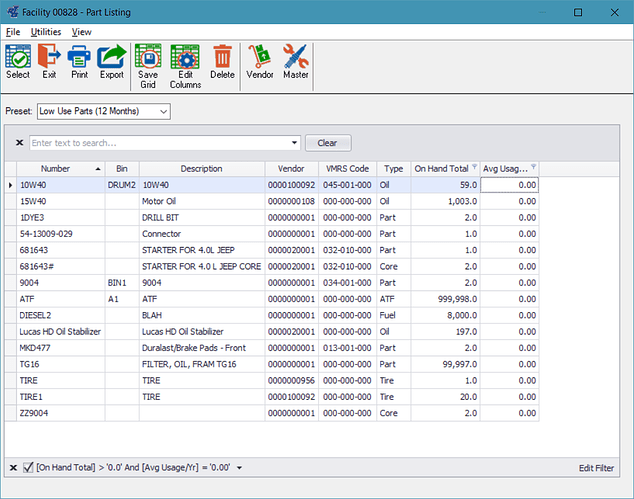 That being said, I like the idea of a report that utilizes the work order transactions to go back through a date range, and I like the idea of being able to tell you the estimated average age of the parts as well. Takes it to the next level.